Maine Coast Semester students spent the weekend of February 25-26 out in the snow and the sunshine at Chewonki, learning about sustainable forestry practices.

The students enjoyed several traditional north-woods competitive events including the pulp toss (giving the heave-ho to a large log); the quarter split (axe-splitting a log, marked with a dot on top, into even quarters, each showing a bit of the dot); crosscutting (using a two-person, crosscut saw to cut a log into three “cookies”); and the log roll (using peaveys, one at each end, to roll a log between two cones three times).

The grand finale was a ferociously fought round of fire-build, a race to see which team could build a fire and boil a can of soapy water over it first. Competitors start with a hatchet, some dry cedar, and three matches–and if you think this is easy, you’ve probably never tried it. Simon Morin (Camden, Maine) was on a team he says was “not good at most things” in the woodsmen’s competition but happened to be “really good at fire-build.” His team emerged victorious.

Farm Manager Megan Phillips says the day was a ton of fun but also more than that: it was an opportunity to teach students about practices that are “hugely traditional and also progressive.“

Sustainable forestry often involves old ways of doing things (like using horse power) that are now regarded as forward-thinking strategies for responsible management of the resource. Megan also notes that many Maine loggers of the 1800s were young men the same age as the semester students and no doubt expressed a similar playful but passionate attitude toward the woodsmen’s competitions. What goes around comes around, in forestry as in other aspects of life. 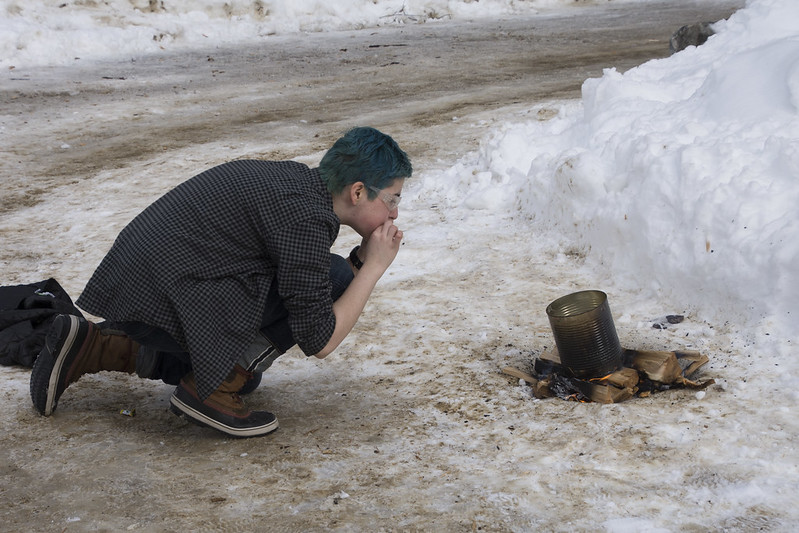 P.S. An unexpected highlight of the woodmen’s competition was that on the spot, to honor the event and its competitors, Megan and English teacher Eli Peirce composed new lyrics to the Beatles classic “Blackbird” as follows:

Oak bough landing on the blue spray paint
Toss that pulp, no time to wait
Split that wood
We once thought you were slackers, but now we know you ain’t

Nancy Kennedy at the ACA